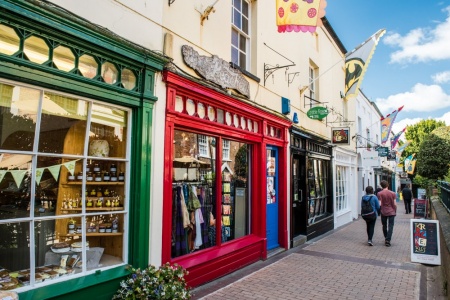 From the Middle Ages, Bath Place was the main thoroughfare to the west of the town until Corporation Street was cut in 1894. The street was straightened and widened in the 18th century and most of the current buildings date from this era. The shopfronts remain remarkably unspoiled by the passage of time. Many of the buildings still have their Georgian shop fronts with octagonal glazed fanlights. The houses and gardens which are also part of Bath Place also take us back in time.

No other name, other than Footway appears until the end of the eighteenth century when the name Hunt’s Court appears. It may have been named after Hugh Hunt, who owned a property in the area. Bath Place was bought by Sir Benjamin Hammett in 1791 and it is thought that his son was responsible for the construction of the terrace buildings on the south side which comprise the shops of today.

Maintaining the look and ambiance of the street is always work in progress.  New paving has been laid to enhance the historic look of Bath Place and make it safer and easier underfoot. Recently a very old street lamp has re-emerged from beneath an overgrown tree.